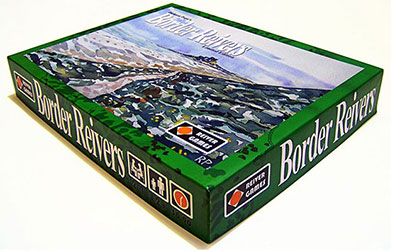 Jackson Pope, creator of Border Reivers (the board game) invokes this particular part of history  an extremely entertaining fashion, by having fashioned a total of 100 units of the board game for people to thoroughly enjoy. A strategy-based affair that involves taking charge of clans by managing your economic and combat-based affairs in equal measure, Border Reivers isn’t you typically heavy Dungeons and Dragons-style affair, keeping it light with a fast pace to ensure a swift and enjoyable game that can run anywhere between 30 and 90 minutes in length.

Before needing to look at the historical context of the game (which is worthy of review in itself as the Border Reivers were an historically fascinating group of men and their destructive actions also a topic of much interest), let’s take a brief look at the game itself.

The components that the game is comprised of are of good quality, though not as good as some figures you’ll find in tabletop games of the quality of those found in games like Gripping Beast’s Saga Range: http://www.grippingbeast.co.uk/Saga.html or Wizards of the Coast’s Dungeons and Dragons: http://dnd.wizards.com/products/tabletop-games/miniatures. It is worth bearing in mind that Jackson Pope created each unit of Border Reivers himself however, which explains why perhaps the miniatures aren’t as good as those you’ll find in mass-produced miniatures sets.

The ease of picking up the rules of the game is notable here: new players will need to peruse the rules for a good 10 or 20 minutes before being comfortable enough to enter into a fully-fledged game. You’ll find examples of various scenarios in the rulebook which should be enough to provide you with information about how the game works in different contexts. 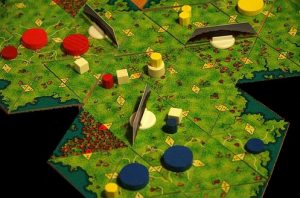 The main thing to remember about the rules is that the gameplay itself is split into 6 distinct phases. The 1st and 6th phases are card-based and are referred to as the First Cards Phase and the 2nd Card Phase respectively. The very first phase requires that you play a card that sports the “At the beginning of your turn..” phrase. The second card phase again requires you to use the same action but this time at the end of your turn and with any cards in your hand that read “at the end of your turn..”.

The phases in between the 1st and 2nd card phase consist of the Reinforcements Phase, the Action Phase, the Combat Phase, and the Taxation Phase. The Reinforcements Phase involves the gambling of your gold in order to have the chance to win armies or extra strategic cards. The Actions phase involves moving around the board strategically, settling in to new towns or building various structures. After the Action Phase, you must deal with the consequences in the Combat Phase where you battle it out with anyone you come into conflict with during the Action Phase. Taxation is the final phase where you can gather income from newly-occupied towns and cities.

The six-stage nature of the game will be confusing at first to people that haven’t played before, but after a few run-throughs it becomes more obvious how to play the game smoothly and without frequent reference to the rulebook.

The game advertises the set as including 10 different strategy cards, which are played at the appropriate time during each six-phase section of play. Cards include ones that are useful in combat (such as Insurrection, Ambush, or Militia cards), building cards (such as the Training Camp, or Guildhouses card), and special cards like the Spies Card (blocks opponent’s Spies card or allows you to see their cards) or the Siege Engines Card (reduces enemy fortification levels).

The game is over once only one player is remaining or a player is able to start their turn with 40 gold in hand.

Perhaps the most exciting aspect of the game is the history behind the Border Reivers themselves (more detailed information about them can be found at http://www.englandsnortheast.co.uk/BorderReivers.html) , as without this particular allusion to history, the game wouldn’t have the exciting edge that it does. Whilst the link to the Border Reivers history isn’t immediately obvious from the components of the game or before you actually start playing (it could be any other economic/warfare-based game at that stage), once you begin building clans, engaging in economic management, and besieging towns and cities the fun truly begins and the historical context becomes much more apparent.

In playing the game, you get the sense in particular that you’re playing a board game based on a real group of people whose motives cannot be truly understood today. As you attempt to balance your economical prowess with building defences and waging war on other clans, you are effectively demonstrating the economic and cultural factors that led to the actions of the Border Reivers. Also, there is still much debate about the lineage of the clans involved in the Border Reivers period, as well as much to discuss about those responsible for the conditions which led to the kind of lawlessness that prevailed during this time.

Though it can take a little while to get used to the seemingly complex  rules of Border Reivers, this board game’s procedures become apparent quite quickly. Matches can be played very swiftly and thankfully don’t drag on for hours like some tabletop board games here can. The 10 strategy card types make the game much more interesting than it would be in their absence as well, but it is the historical context that gives it the feeling you’re acting out small parts of history.

Sometimes it can be nice to strip things back to the basics of war board games like Border Reivers and various other war games online. This one is a game that allows you to see more than one side of the actions of these seemingly lawless and violent individuals’ situation. 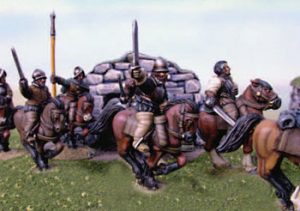 Those wishing to learn some decent Border Reivers rules should check out these excellent pdf articles written by Matthew Hartley at War Games Illustrated.